Hey everybody, Dr. Drew Ferris here, I wanted to talk to you about a question that I get every day from parents. And it’s this: Why do I see seven and eight year olds running around town with braces on? Isn’t that too early? Don’t they still have a lot of baby teeth left? Isn’t that aggressive? It doesn’t really make sense. So I wanted to clear the air about early orthodontic treatment.

First, the American Association of Orthodontics recommends that every child between the ages seven and eight be seen by an orthodontist. Second, it’s something that I always recommend in my office as well, and with good reason. It used to be that we just waited until kids were in, say, high school before we looked at them orthodontically, because at that point, all of their adult teeth had grown in.

The problem with that approach is that a lot of patients were getting their adult teeth extracted if there was crowding, or if there were bite issues. We were treating them too late and we weren’t benefiting from their growth. Ultimately, we just weren’t taking care of our growing patients like we should. So luckily, now we have an option, which is a first phase of treatment. What I tell parents is that in the first phase of treatment, there’s a short list of reasons why we would do it.

The first reason why early orthodontic treatment is so important is that if there’s something bite related, like, say, a crossbite, where the upper teeth fit inside the lower, that can actually effect growth moving forward and can create skeletal asymmetries that then lead to surgery down the road. So we always want to take care of that at an early age. The second reason is that if there’s a lot of crowding that we can see on our 3D X-ray, we can treat at an early age to make space. Doing this early on avoids things like tooth extractions later down the road.

I want to show you what was traditionally done and why we don’t do it anymore. This is a situation where this guy’s 10 years old, he comes into the office. And what you’ll see is in the corners, here, he’s supposed to have a primary or a baby tooth canine in each one of those corners. But his dentist took those out thinking that it would make space for his adult teeth to come in. The problem is it just creates a path of least resistance for new teeth that come in. But it doesn’t gain an overall net amount of space, because we’re not changing the perimeter. And now this little guy is basically condemned to having extractions, because you can see that where these canines are, they virtually have no path to come in. And to further that, they can start pushing on the actual lateral incisor, which is the adult tooth and treating it like a baby tooth. And if that happens, they can actually push that out and cause you to lose your front teeth.

The nice thing about what we can do in a first phase of treatment is we make room so we create a bigger perimeter. And then we can have a lane for those teeth to come in. This prevents three potential big risks:

So here’s what it actually should look like. Instead of taking out good adult teeth because we see crowding, what we want to do is a patient like this comes in at the age of this girl, six years, 10 months. So we started at the age of seven, what we did is you can see from an aesthetic standpoint looks great because we were able to align the front adult teeth. But during that we also made space for the rest of the teeth to come in by gaining arch width or gaining space. Therefore you can see on the top where these teeth were completely overlapping and walked out and had no room to come in. Within one short year, you can see that both of these teeth now have a lane to come in. And we’ve prevented all of those big risks that I just talked about. Same within this situation too. So came in at the age of eight, and within one year she was treated. 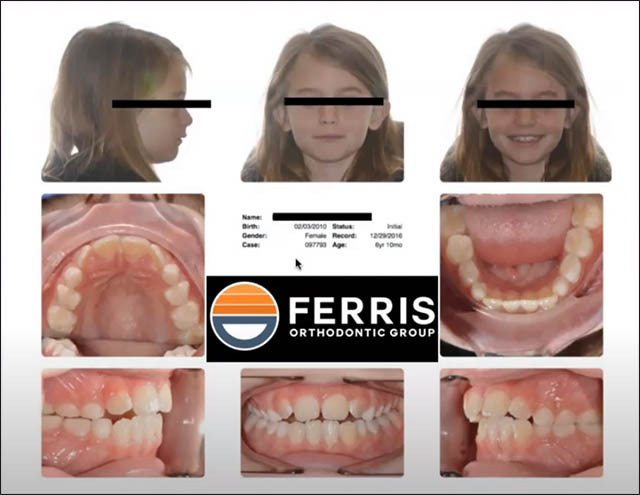 I would definitely recommend that every one of your children be seen at the age of seven or eight and like I said the majority of your children won’t need treatment at this young age but for the ones that do, it minimizes so many risks down the road. So if you’re curious about my practices, we have one in Santa Barbara, one in Goleta. At both of them, we offer complimentary consultations so feel free to give us a call and I’d be happy to take a look and see if there’d be a need for early orthodontic treatment..